A bunch of wetness

I was given permission to take a 2 night trip since there was no kids soccer and my mother-in-law was coming to visit. Since I did not have a lot of time, I decided to revisit Big South Fork and see some new places. The Honey Creek Loop had been on my radar for a while and I decided that starting at Leatherwood Ford and heading south would work. I was also curious to see the new trail that extended the John Muir Trail south of the O&W bridge.

Of course the weather forecast was horrible, rain and highs in the mid-50s. As I was driving down I75 on Friday afternoon, I was seriously doubting my decision making. The rain was coming down, traffic was horrible and I saw 2 accidents on the side of the road in a 50 mile stretch.

I stopped and got Subway in Oneida and had a footlong and a beer in the car while the rain let up and then changed into hiking clothes and headed down the trail. Within a couple minutes (~.25 miles) I passed a large tent with a blue tarp over the top and a dog tied to a tree. The dog barked and someone in the tent yelled at the dog. It struck me as a very weird place to make camp, right off the trail and a couple minutes from the parking lot.

I continued down the trail and quickly had to take off my rain jacket since I was sweating enough to defeat the purpose of a rain jacket keeping you dry. Soon it started getting dark and I started thinking about a place to sleep. Unfortunately the JMT is right between the river and a pretty steep slope so there was not a lot of options as I got close to the O&W bridge. Just before the bridge is a large rock and a flat spot that I considered, but there weren't any good hammock trees. In addition, as I got closer to the bridge, I heard what sounded like a bunch of idiots whoop'n and holler'n, I assumed it was mountain bikers coming down the O&W trail so I did not really want to stay close to the road.

So, I continued over the bridge, 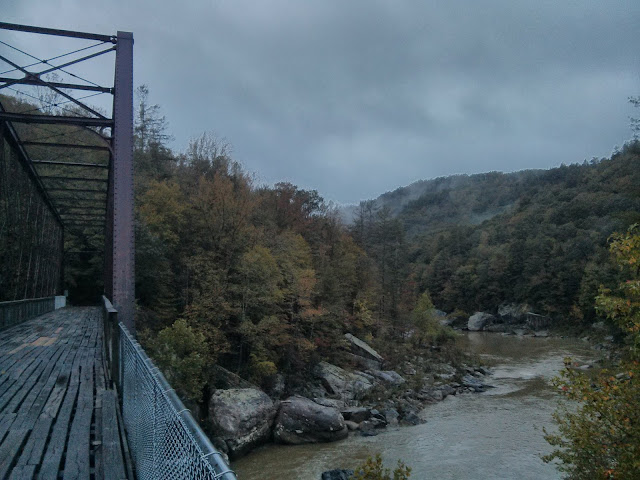 hoping to find a good campsite not too far down the trail. As I crossed the bridge, I heard voices and looking over the edge I saw a couple kayakers. My guess is they had just come through the rapids and that was all of the yelling.

I crossed the bridge and found a site to hang my hammock. This was one of the many times I am glad to be hanging vs. pitching a tent. Thankfully the rain had quite, so I was dry and was able to set up camp pretty easily. I enjoyed a Ten Fidy while reading my book and fell asleep around 10. Heard rain off and on through the night, but no real wind so nothing got wet under the tarp.

Woke up and it wasn't raining so I took a short walk back to the bridge. Then, boiled water for coffee and oatmeal. Sky proceeded to open up, but since I did not have anywhere to be, I just enjoyed my coffee and hoped the rain would stop soon, which it did :) Got all packed up and headed down the trail. Well, headed up the trail since it immediately starts climbing away from the river. 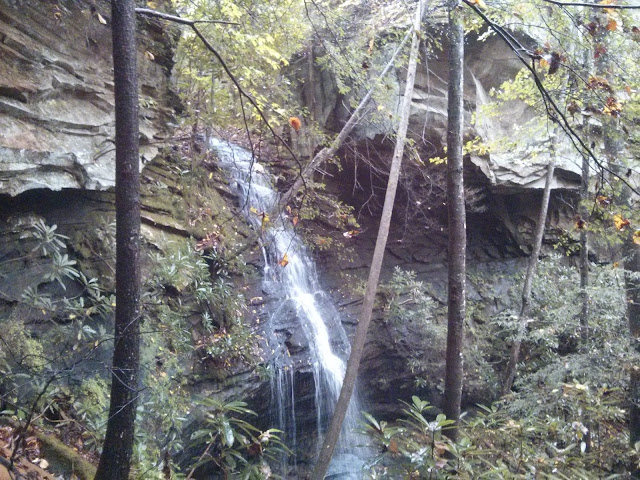 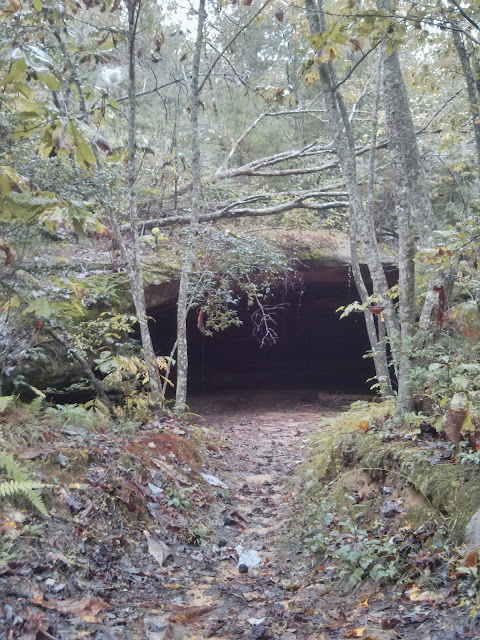 Then above Devil's Den, you get to the top of the ridge and the trail flattens out. This was just a great stretch of trail, it felt great to be walking in the woods. 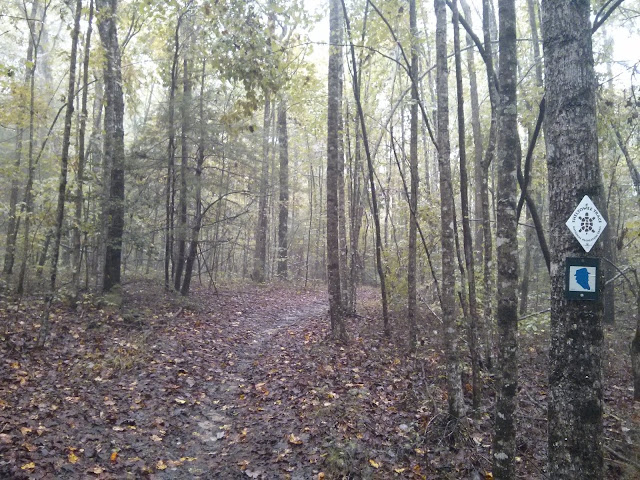 Interestingly, there is a picnic table and fire ring just as the trail hits the ridge and levels out. There are also some lines strung between some trees that look like they are for tying up horses. But, as you continue down the trail, you come to another side trail/forest road and a sign that says "no horses". Were horses allowed before the JMT was completed through here? Regardless, it would not be a bad place to camp since there is a pretty large clearing and enough flat spaces for a couple tents. No water and no view though.

I continued down the trail and intersected with the Honey Creek loop. I decided to go away from the river with the idea that I would find a campsite with a nice view somewhere along the river. The trail passes under a lot of rock faces 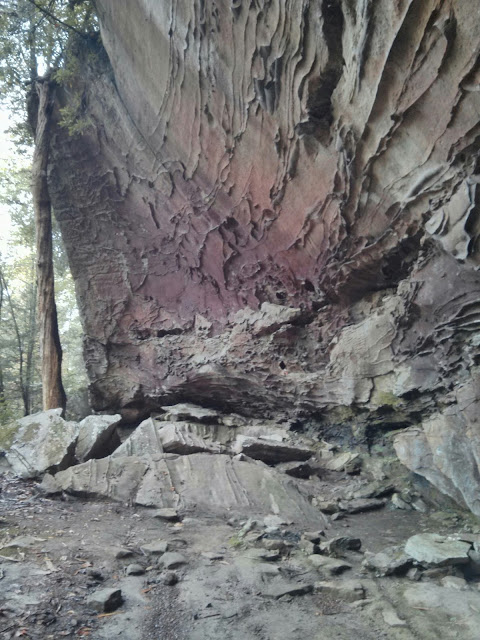 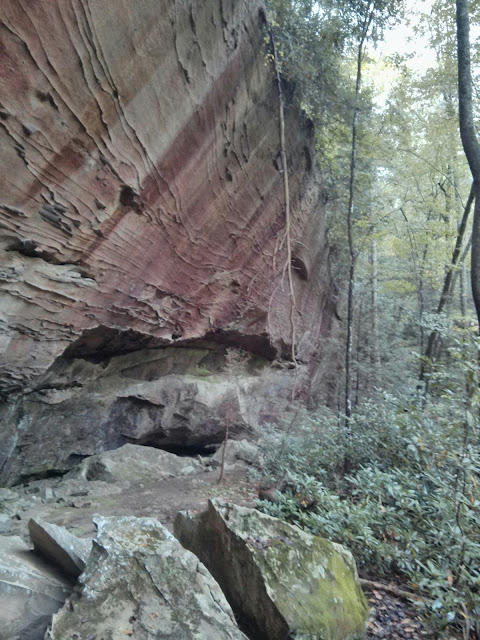 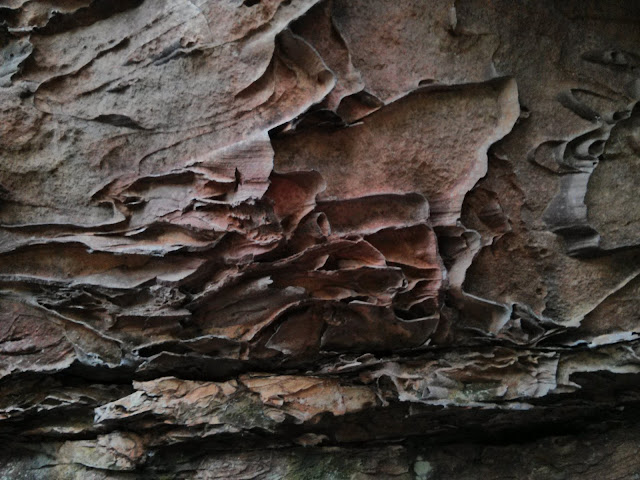 The trail passes through a rock tunnel with a nice arrow to keep you on track (in the second picture, you can just make out trail markers on the far side). 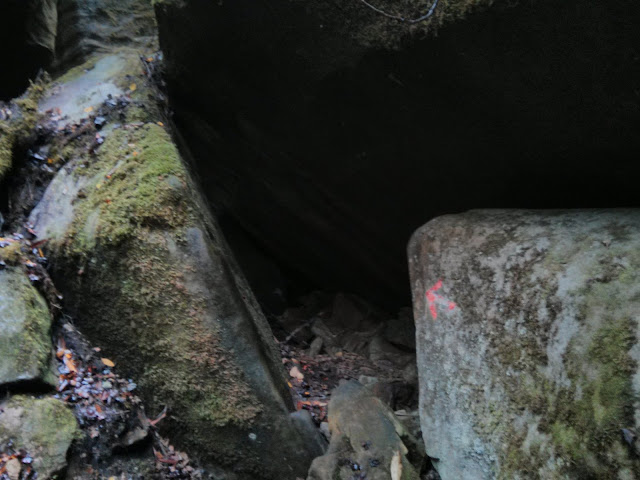 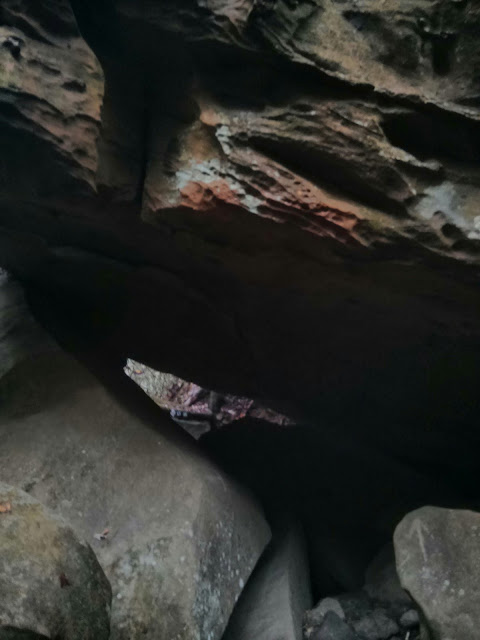 The trail passes a very nice waterfall (Ice Castle falls according to the sign) that looks like it might only flow if it has been raining. 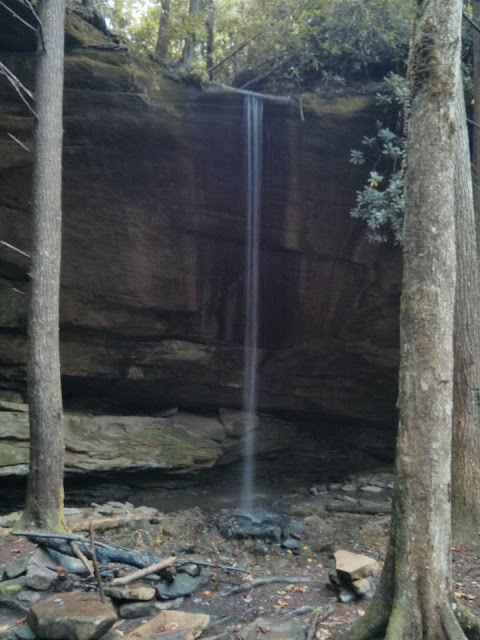 In a couple spots, there are side trails that aren't marked, I took a guess which was the actual trail since that wasn't marked either. I eventually made it to the trailhead where there is a map of the area. I was a little confused since I wasn't expecting the trail to cross the road and the map did not show the road going to the Overlook, just a trail. I eventually figured it out and headed towards the river.

The trail passes some more waterfalls and rock faces and eventually get to the stairs that climb up to the overlook (the blazing left something to be desired in this area). 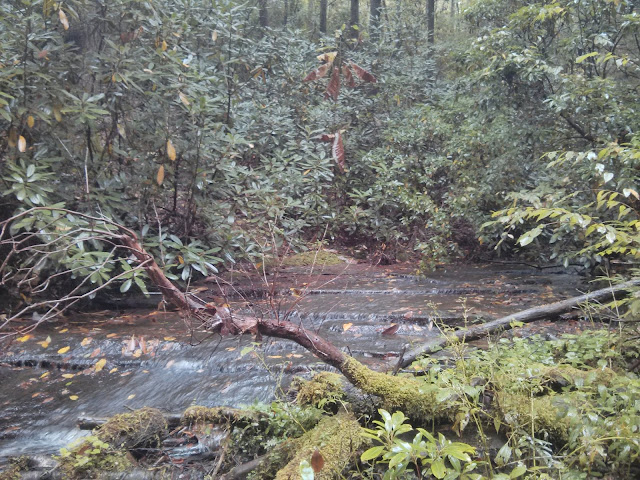 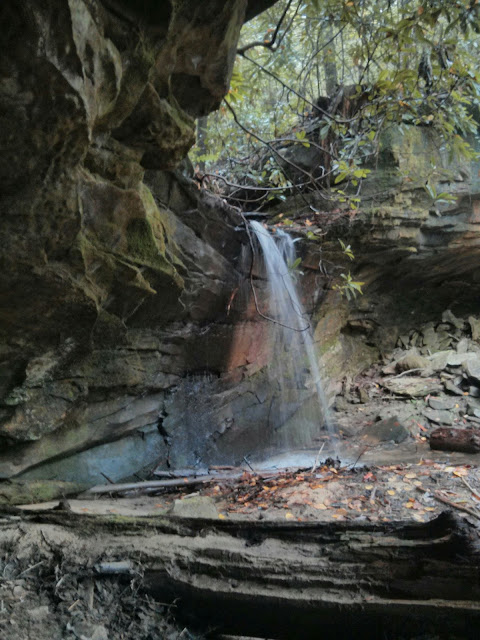 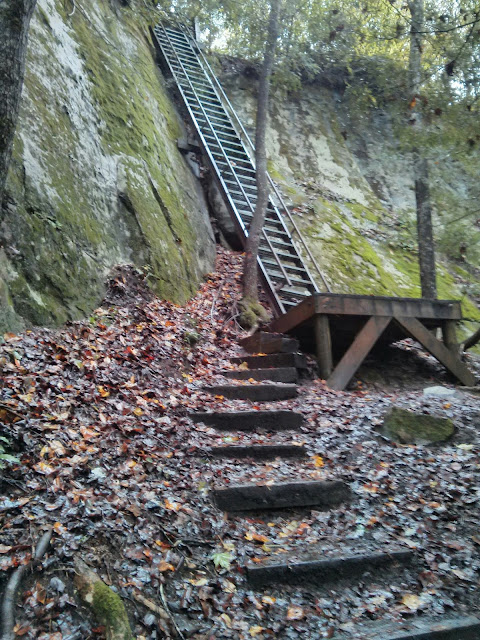 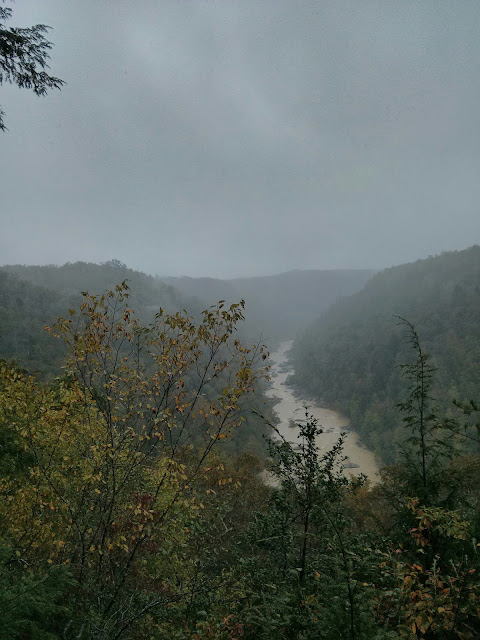 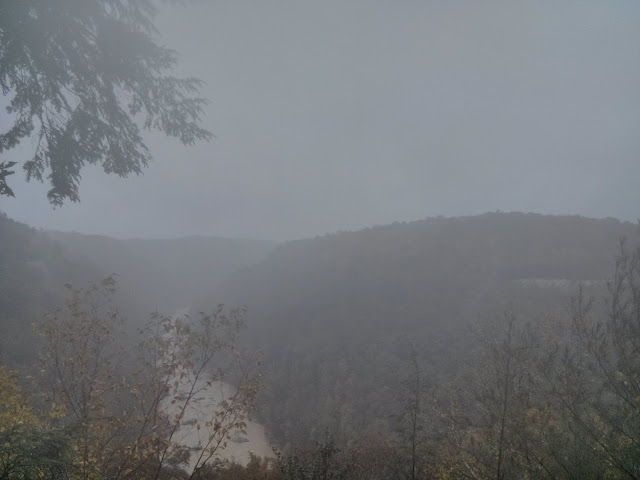 Not long after the overlook, the trail gets close to the river where there were a couple of nice campsites. But it was only 2pm and the rain was picking up. It is one thing to hike in the rain, but I did not want to hang out by myself in the rain for the 8 hours, so I decided to hike back towards the bridge and see what time it was when I got there.

After climbing over rocks and small waterfalls (the trail goes up the creek in places) and getting lost near the Indian Rockhouse I arrived back at the point where the JMT intersects with the Honey Creek loop. It took about 3.5 hours to do the loop.

I headed back up the hill towards the O&W overlook. Along the way I spooked a couple bears, they spooked me as well. I had been daydreaming and as I came to a rise something grunted at me, I looked up and two bears were about 20 feet away. One immediately ran off, while the second stood up and tried to figure out what I was. I yelled and waved my arms and he decided to shuffle off down the hill. No time for a picture of the bear, but not long after I came across a salamander in the middle of the trail. 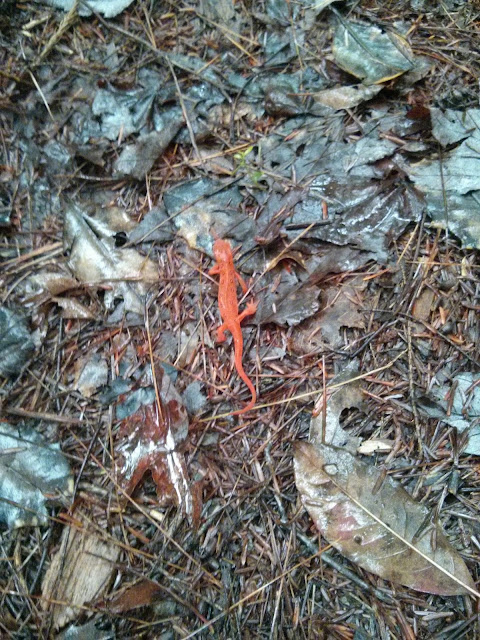 I continued on and eventually came to the O&W overlook. 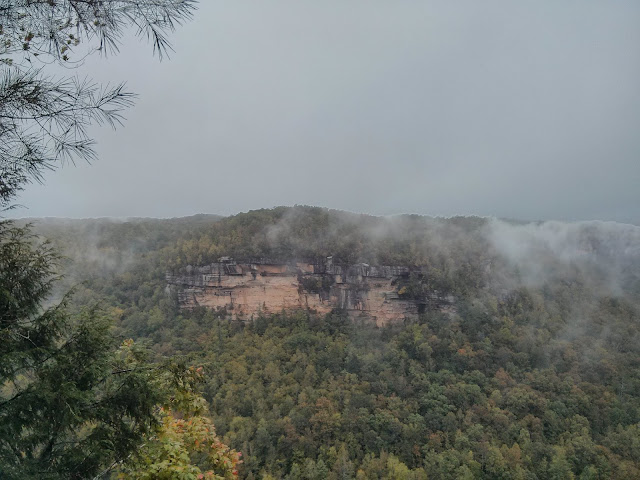 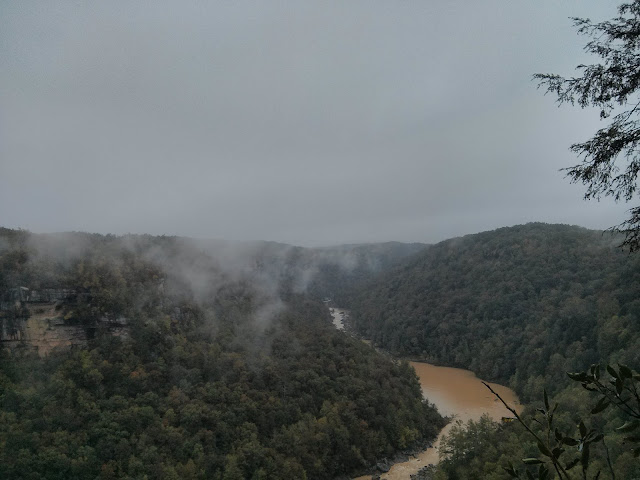 And then down the trail and over the bridge. I climbed down the stairs next to the bridge to get a better view of the river. 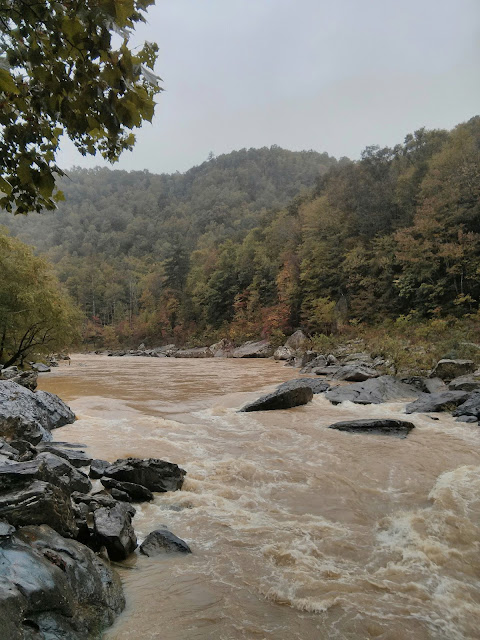 At this point, it was about 5. I decided that I could be at my car by 6 and have a burger and beer for dinner and sleep in my own bed so down the trail I went. I never got my burger because I was behind a minivan that spun out on KY92 heading towards I75. He ended up crashing into an on-coming car that ended up in the ditch. After helping with that mess and then missing a turn on my rerouted way back home, it was too late for the dinner I had planned. I ended up getting home around 10 and enjoyed a dry night's sleep.

The Honey Creek Loop is a great hike, I will definitely do it again.

For some reason, I am unable to reply to comments. I do appreciate the few that I receive.